By susanvanceOctober 31, 2019Uncategorized
No Comments 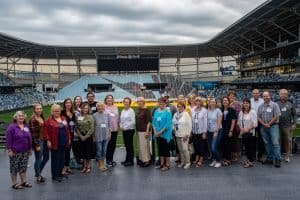 FCS Professionals kicked off the 2019-20 “season” with a behind-the-scenes food service tour of the brand new Allianz Field.  Allianz Field is the new home of the Minnesota United Soccer team.  The entire stadium is breath-takingly beautiful with an overall theme of the rippling waters of Minnesota’s 10,000 lakes. 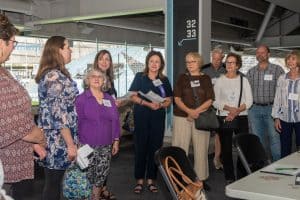 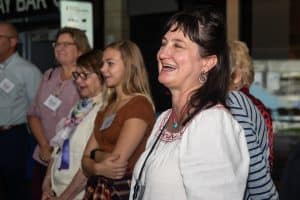 Our program began with a welcome to our guests and new members.  A new feature of our meetings will be a time to announce job openings and members searching for a new position can give a brief description of the type of work they desire.  This will allow for members to better connect with one another on the job front!  This year we are celebrating our 95th birthday all year long with special treats and surprises.  For our first meeting, there was a drawing to win a beautiful fall plant. 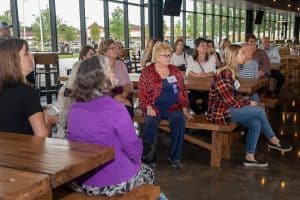 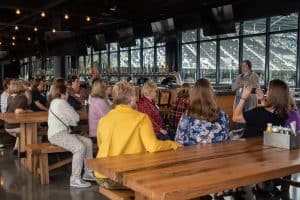 The tour kicked off in the Brew Hall–home of 96 taps!  The Brew Hall is used on game days but it is also a popular spot for Minnesota United fans to gather for free watch parties during away games and is also used for private events.  Allianz Field is served by hospitality management company Delaware North.  Delaware North also runs the food service operations at Target Field, Target Center, and MSP airport.  Bill, the Executive Chef, started his career as a personal chef to the Pohlad family and worked his way up through various positions at Target Field.  He was very excited to jump to the new Allianz Field as the soccer season is much shorter than baseball!  Eric, the General Manager, started his career in the hospitality industry in Wisconsin working for Miller Park and Lambeau Field before moving to the Minneapolis area.

The food service operation consists of one main kitchen plus several smaller “pantries” to serve suites.  The concession stands contain cooking equipment to prepare those food items.  The concession stands are staffed mostly by non-profit groups who receive funds for their organizations by working at the games.  On game days, to prepare for a 7 p.m. game, the ovens are fired up around 9:00 a.m. and the sous chef arrives around 10:00 a.m.  The rest of the crew arrives between 12-2 p.m.  The food being prepared serves the various suites.  Special game tickets are required to visit the suites.  The tickets are considered “all-inclusive” for food and soft drinks but not alcohol. 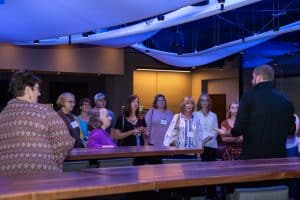 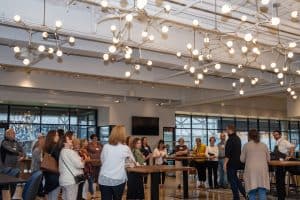 The Field Suite is home to a special guest-chef program.  Local chefs prepare a special food items for each game.  Chefs that have participated this year include Justin Sutherland of The Handsome Hog, Tim McKee of Octo Fishbar, Alicia Hinze of The Buttered Tin, and many more!  Along with the guest chef program, there are several different food stations with traditional field fare along with other delicious bites! Chef Bill mentioned that soccer fans tend to stay in their seats so their busiest times are the hour before the game begins and half time.  This was a different experience vs. his time at Target Field where people are constantly milling around.

Another differentiating feature of the food service operation at Allianz Field is their beer program.  Most stadiums sign a big contract with Miller-Coors or Anheuser-Busch.  They wanted to do things differently so they signed several smaller contracts with many craft breweries.  This allows them to serve a variety of local craft beers and give many options to patrons.  They also designed their partnership with local food businesses differently.  Typically, if a local restaurant has a presence at a stadium, the restaurant gives their recipe to the food service operation of the stadium, and their workers prepare and serve the food.  At Allianz Field, the local restaurant prepares their own food.  This has helped to provide consistent quality and the restaurant remains more in control.  Local restaurants with a presence at Allianz Field include Brasa, El Burrito Mercado, The Handsome Hog, Hot Indian, Afro Deli, and more!

On the day of our tour, the kitchen staff was busy preparing for the home game the next day so we were not able to visit the main kitchen but we did get to see several suites and the smaller “pantries”.  It was a fabulous tour and a huge thank you to Colleen Glenn and Gerry Luepke for organizing another wonderful program! 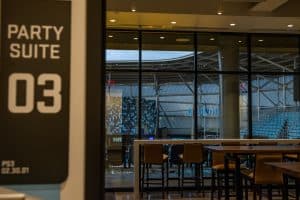 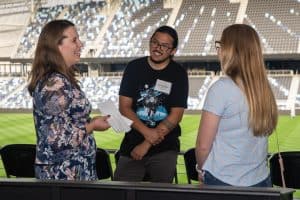