On Monday, December 5, FCS Professionals gathered at the new home of the Minnesota Vikings, US Bank Stadium, for an exclusive behind-the-scenes tour of the facility and food service operations.  We were hosted by Gregg Malsbury, Executive Chef, Katie Paige, Administrative Assistant to Chef Gregg, and Stephen Arominski, Assistant General Manager. 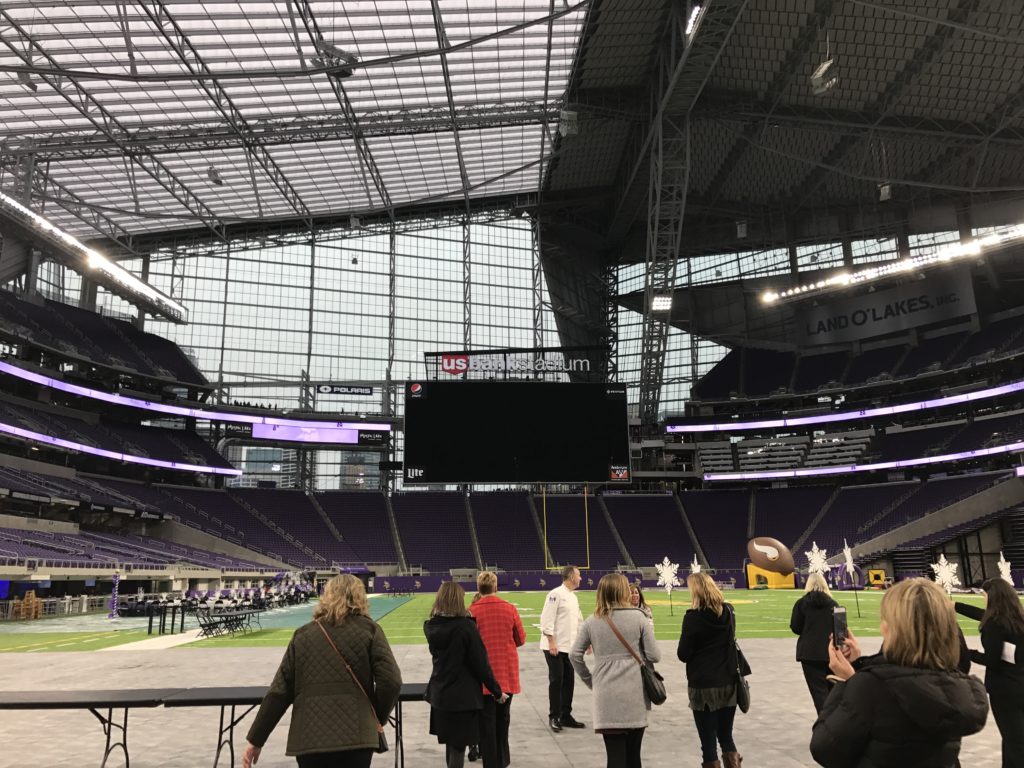 We started our tour on the actual playing field and got acquainted with the various suites and layout.  It was the perfect opportunity for a photo! 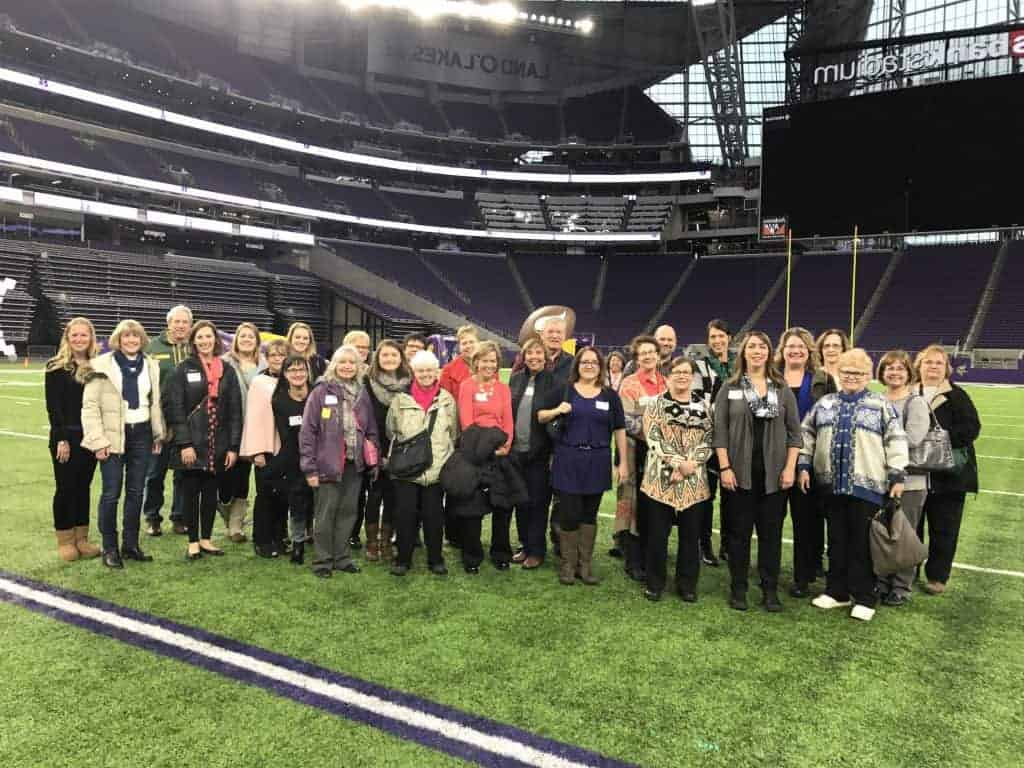 Next we visited the loading docks, refrigerators & freezers, main kitchen, and ware-washing.  The kitchen was equipped with many combi-ovens, ranges, and of course, giant kettles for cooking all of that game day chili! Most of the food is prepared in the main kitchen and “finished” in smaller kitchens in the suites. There are so many dishes dirtied during an NFL game that it can take two to three days to wash them all!  There was a small room dedicated to all things pans (sheet, hotel, etc).  Chef Gregg stated that on game day, that room will end up empty by the time all of the food is prepared.  Due to security concerns, we were not able to take pictures of the back-of-the-house operations. 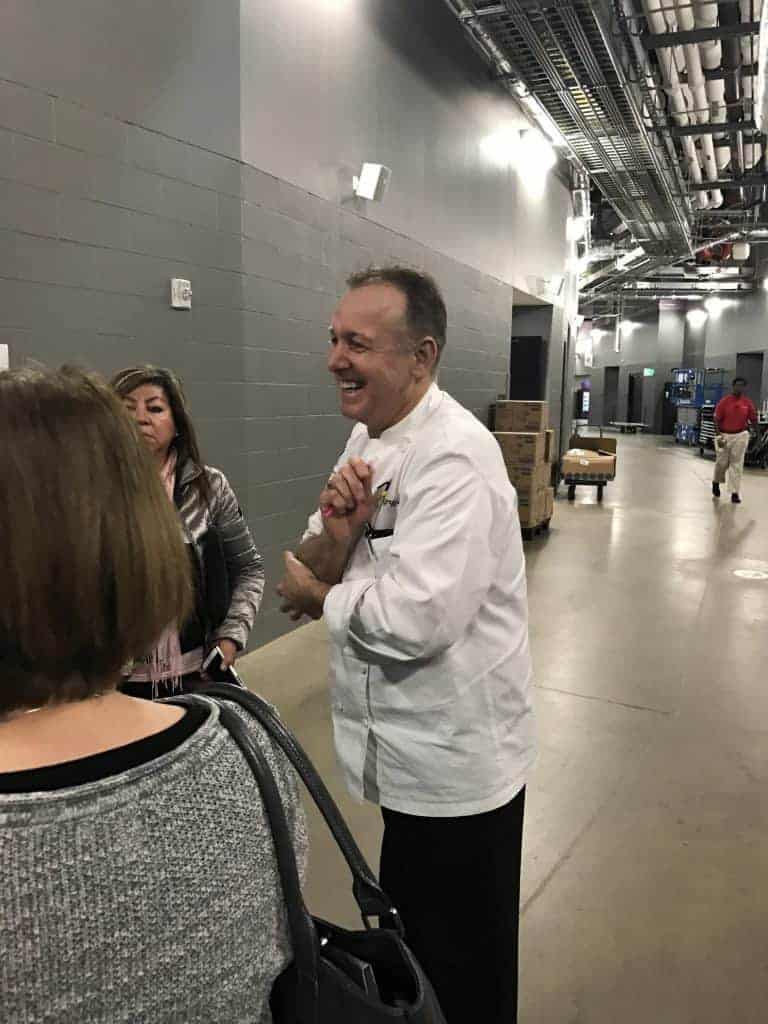 Chef Gregg discussed the challenges that they have faced in the first few months of operations.  Employee training and finding a skilled workforce is a challenge across the board for food service in the Twin Cities.  He is hoping to develop a non-profit dedicated to addressing these issues much like he was able to do in Washington D.C.   Other challenges have been keeping up with the catering volume.  The new stadium is the new “it” place to hold functions from weddings to corporate meetings and events.  In fact, on the day we were touring, they were preparing to host the Vikings team Christmas party along with many smaller corporate events in the suites. 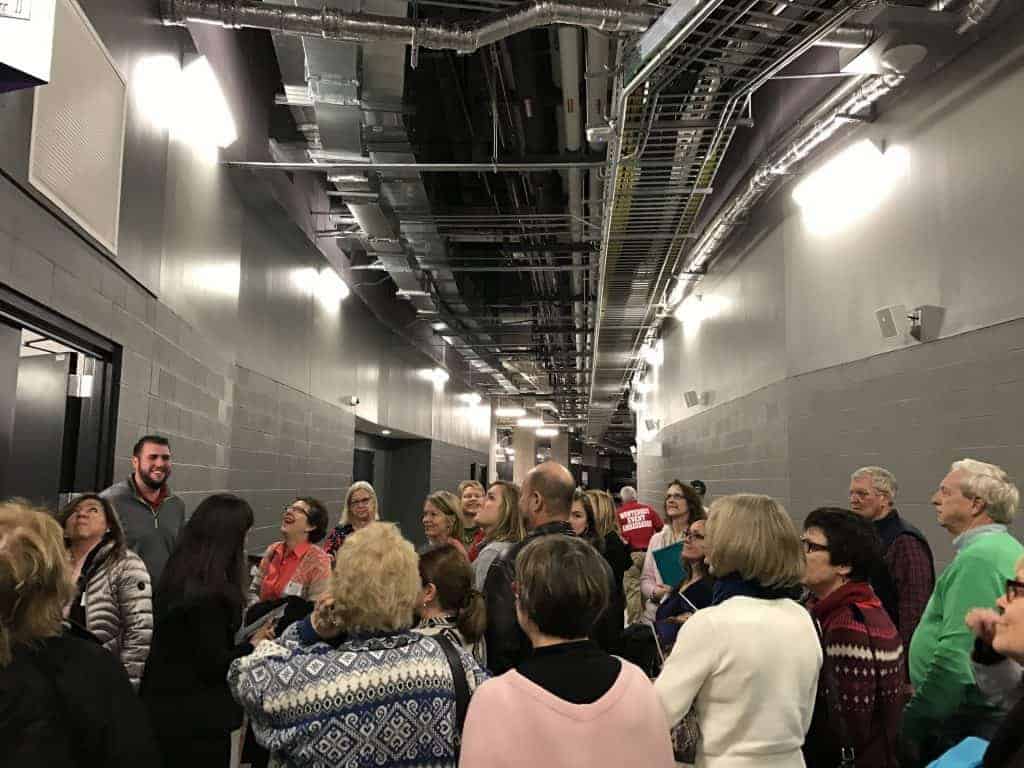 The second half of the tour was led by Stephen Arominski, Assistant General Manager.  He took us to the press box.  The space was impressive!  Not only were there incredible views of the field–but the food service area was abundant with food and beverage readily available for hungry reporters (who hopefully give a thumbs up in their writing and broadcasting!) 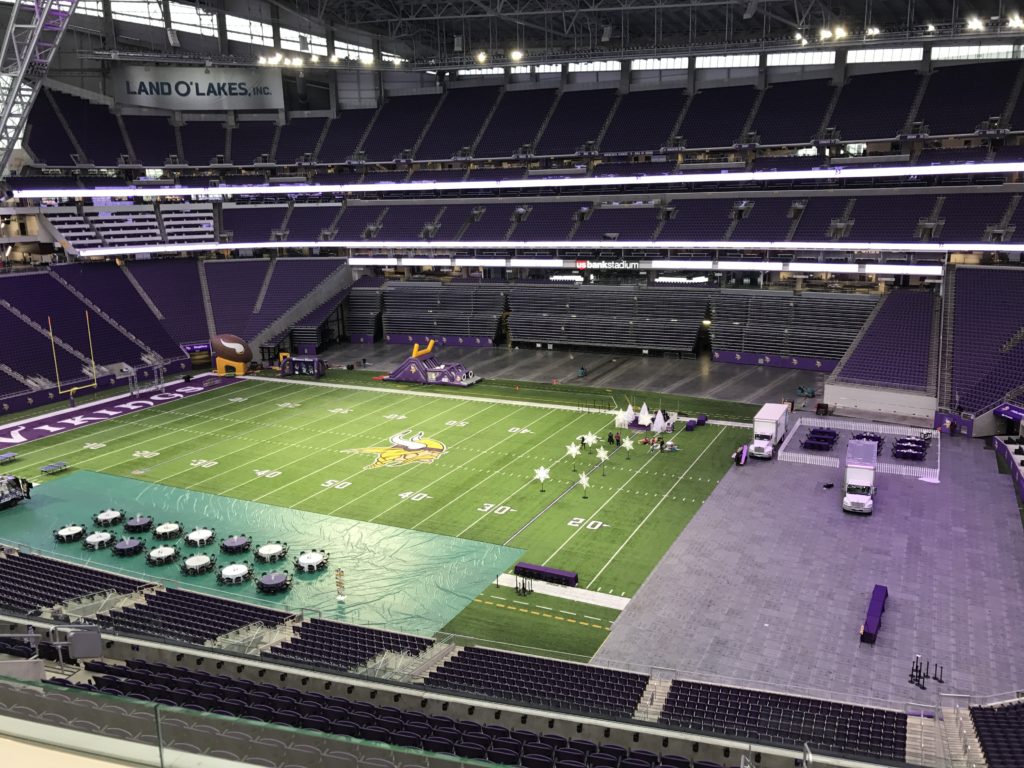 View from the press box 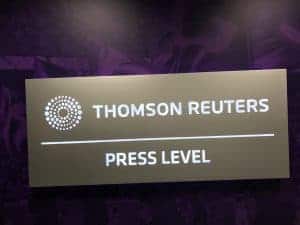 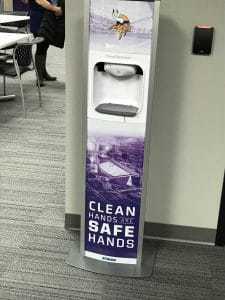 After the press area we strolled the concourses learning about the concessions.  A fun fact that probably stuck with everyone was about the sheer volume of cheese curds consumed!  At Curds and Cake, they feature a Blue Moon beer battered Ellsworth Creamery cheese curd.  They can sell 1,500 pounds of these during an NFL game! 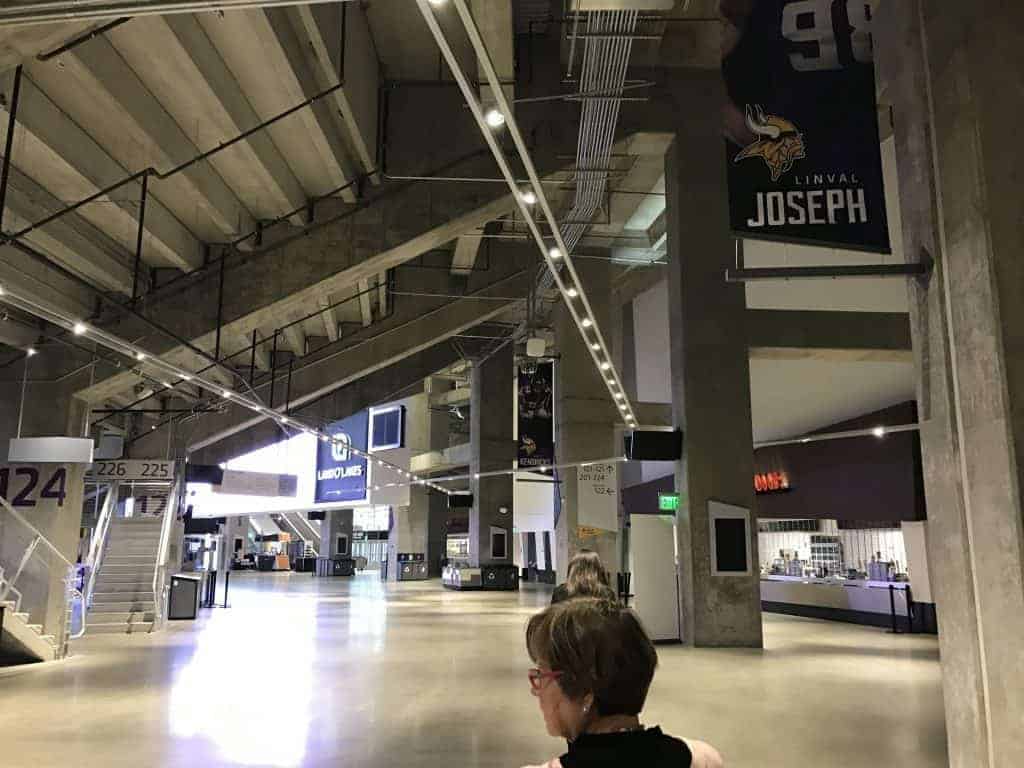 Our last stop was one of the specialty suites– the Cambria Suite. The space was gorgeous with custom made Cambria counter-tops featuring the Vikings colors–purple and gold!  The suites are all-inclusive for food and drink with the price of a ticket.  This has been a learning curve for determining how much food to make as they have found when it’s “all-you-can-eat” people eat a lot more! 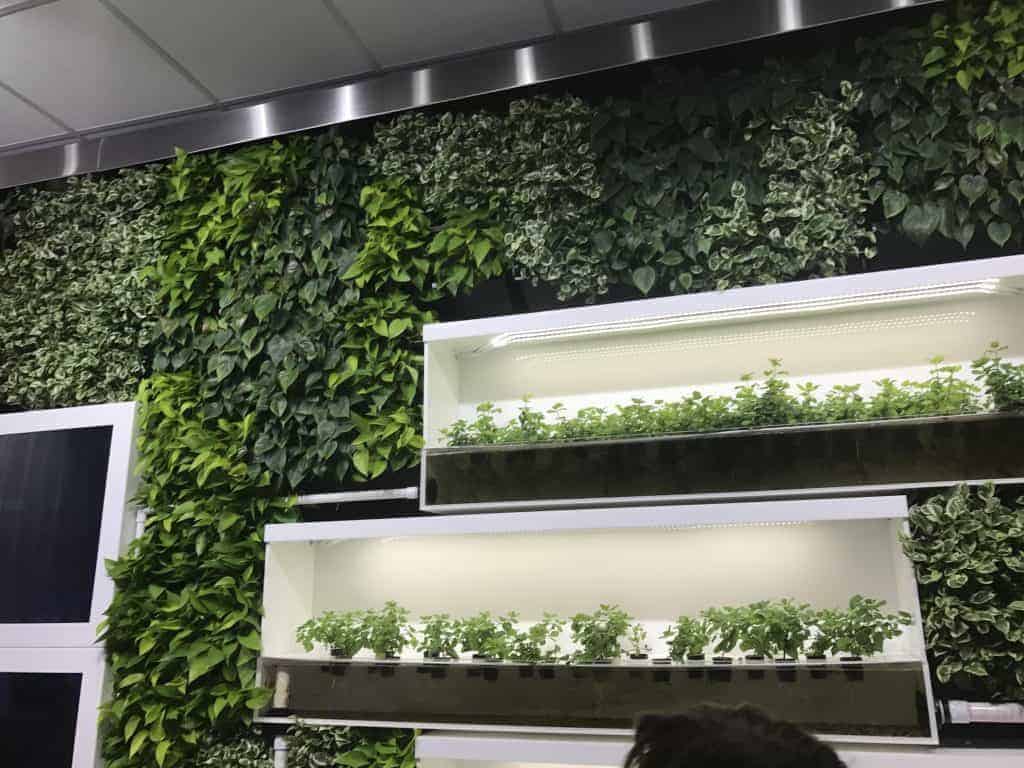 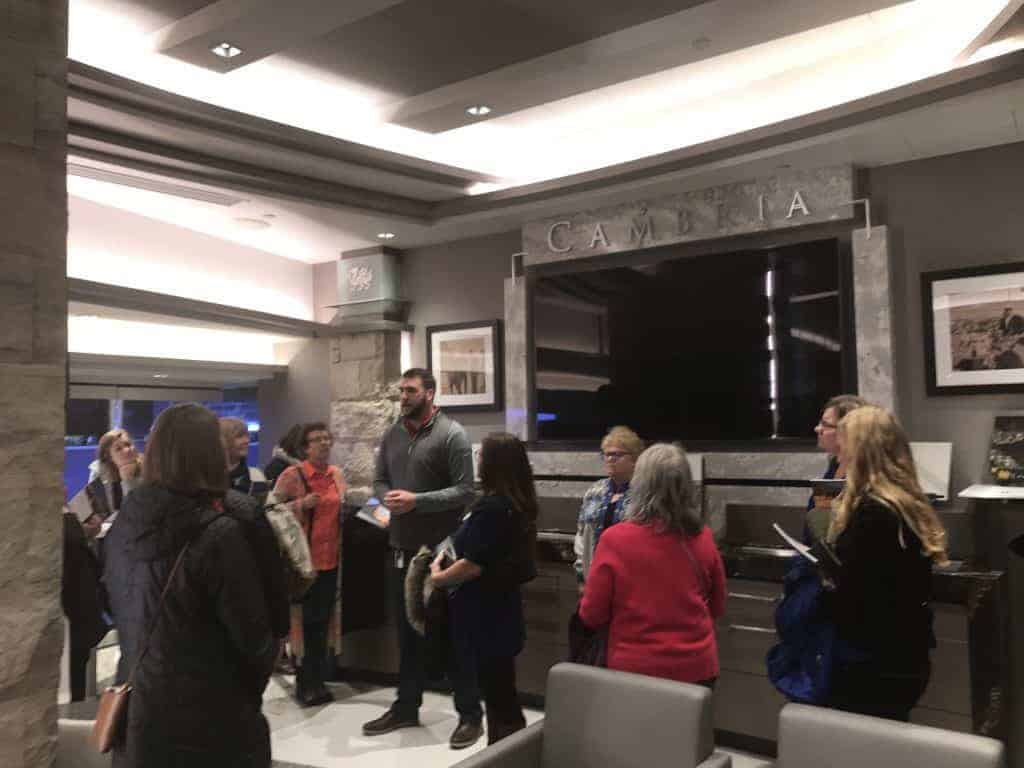 After our tour, those that could stay headed to Erik the Red for an optional happy hour and tour debrief.  Erik the Red opened in October and is directly across the street from the stadium in the former Hubert’s.  The theme of the restaurant is “Nordic BBQ” complete with wraps made with lefse, smorgasbords with various pickled items and smoked meats, and a whole list of braised and smoked meats to round out the barbecue.  Erik Forsberg, owner of the Erik the Red as well as Dan Kelly’s Pub and Devil’s Advocate, greeted our group and spent time answering questions about this new endeavor.  We learned about the renovations completed to turn the space into a true restaurant.  Hubert’s was always  known as a bar with some food.  He desires Erik the Red to become a neighborhood eatery–not just a place to go before or after an event at the stadium.  The nordic barbecue concept came together when they asked, “What would Minnesota barbecue look like?”  The head chef comes from Hell’s Kitchen.  Together they hashed out ideas and it became Erik the Red.  We enjoyed our food and beverages and were treated with warm apple spice and salted caramel cookies at the end! 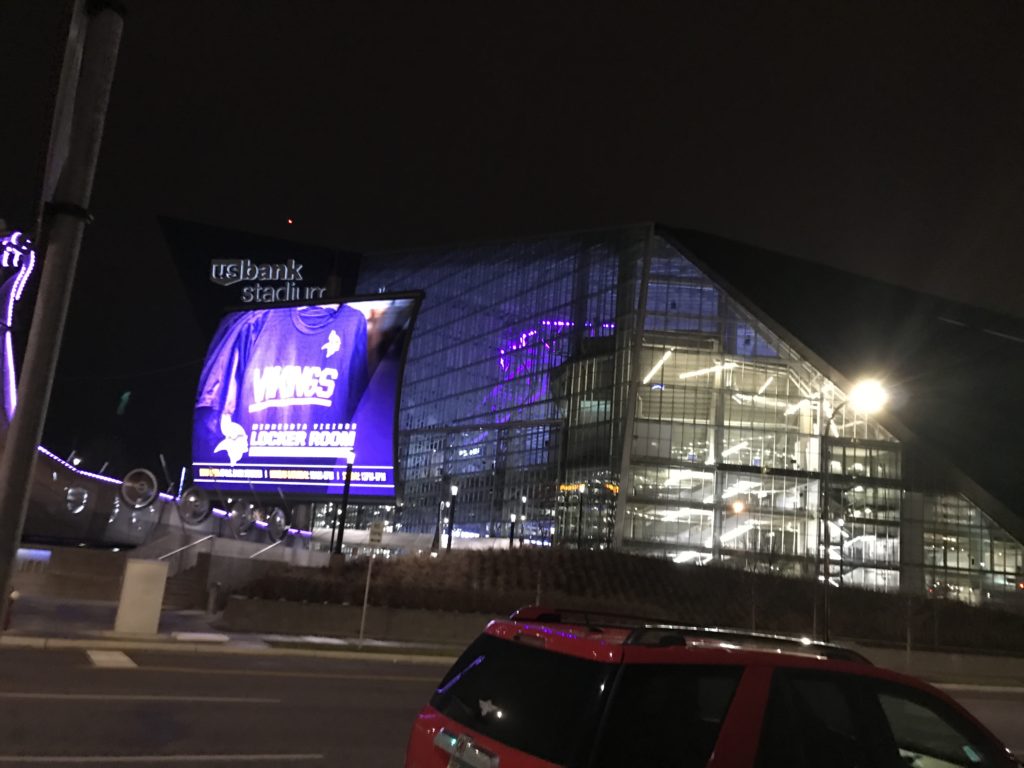