By bloggerMay 17, 2018Uncategorized
No Comments 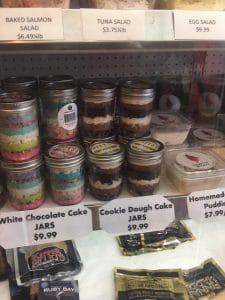 Thank you Gerry Luepke for this trip report!

Do you remember the 2008 Chocolate Lovers’ Cookbook and a recipe submitted by Bonita Buttke for Egg Cream?

As Bonita mentioned there are no eggs in this refreshing chocolate drink.  It’s a soda produced almost exclusively in New York (particularly Brooklyn). The basic ingredients are milk, seltzer, and chocolate syrup. It’s traditionally made in a small Coke-style glass.

I just experienced my first Egg Cream while participating in a small Urban Oyster group walking tour of Brooklyn.   The Egg Cream was delicious and since arriving back home I’ve made and enjoyed several!

The tour included ambling through Brooklyn’s premiere culinary neighborhoods. I visited and sampled foods at Italian and Middle Eastern shops, cafes  & restaurants that have long been the neighborhood’s staple. Many specializing in artisanal foods.

We also learned about some of the homes and gardens in the area.  The day was beautiful and time well spent.  If you’re planning a trip  to the Big Apple, you might want to book a tour and visit Brooklyn.

FCSP Annual Meeting & Dinner at the Arboretum on May 17, starting at 3:00 pm. Click here to register.