Are Carbs & Refined Grains the Worst Thing in the American Diet?

What an amazing speaker we had for our September virtual meeting; Dr. Julie Miller Jones is amazing!  Over 60 participants joined us in kicking off our program year with renowned speaker Dr. Julie Jones and a program centered around carbohydrates and refined grains.  Susan Vance, FCS President-Elect, summed up most of our feelings when she shared how excited she was to be kicking off this “Season of FCS Professionals.”

Consumers are subjected to many mixed messages about carbs and refined grains. It is difficult to know what to believe.  Dr. Jones shared her vast knowledge about this subject and addressed some of the current research findings.   We learned that in most countries outside of the United States, it is recommended that people consume a 50% of their calories as carbs.  Yet, in the United States many popular diets tell us to reduce carbs.   Should we eat carbs or not? Let’s look at some data Dr. Jones shared. 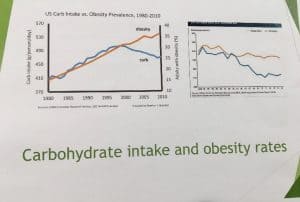 We learned that in order to be healthy it is important to have the right mix of carbs, refined grains, and whole grains in our diet. This graph Illustrates that even though carbohydrate intake in the U.S. has gone down, obesity rates have continued to rise. 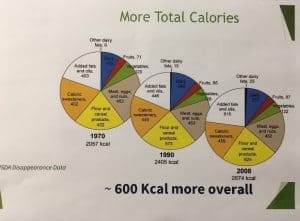 Over 40% of the U.S. population is considered obese. If carbohydrate consumption is decreasing, why are we getting heavier?  Calories are the reason! We have 600 Kcal more available overall than we did in 1970.  We are eating too many refined grains and half of those are not staple foods like bread but from indulgent refined grain foods that dietary guidance recommends ‘to eat sparingly.’  Think donuts and cookies! It was also fascinating to learn that a higher intake of whole grain foods is associated with lower disease risk.  Think oatmeal and bran flakes!

With diabetes also of concern in the U.S., Dr. Jones discussed current research and her thoughts on the effects of carbohydrates on blood sugar levels, measured by a scale called the Glycemic Index.  Her conclusions were these:

Carbohydrate quality should consider all attributes of a food – its nutrients and its detractor components such as sugar.

For weight issues and many disease states, carbohydrates are not the problem.  It is the extra calories consumed!

The Last Word from Dr. Jones:  For good health and longevity, include the right mix of carbs in your diet. Make half your grains whole and focus on staple carbohydrate foods – breads, pasta, cereals, rice.  Enjoy indulgent grains – doodles, ding dongs and doughnuts occasionally.